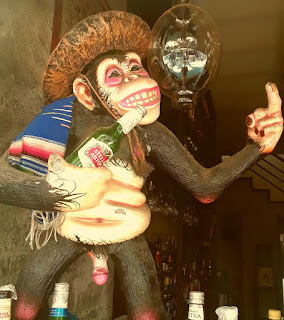 I walked away a bit flabbergasted. I grew up in the seventies. If I needed emotional support, or even gave a hint of it, I might have been beaten beyond recognition. I wouldn’t have been beaten at home but certainly shamed. They would say something like “Who the hell do you think you are the queen of Sheba? And then made fun of my general lack of character and weakness. They would have laughed me out of the living room. In some ways that reaction was a good thing. In some ways it was bad. The bad part was that we eventually wore black leather and became drunk and disgusting. The good part was that, we eventually, learned that emotions were limited and not permanent. You realized you could live through almost anything.

Back in those days, if you really had issues, they would put you on lithium. There was no in between. Schizophrenia was schizophrenia back then. There was no mild bipolar shit. If you were mildly bipolar it just meant you were an artist or a musician, painter or poet. You felt more deeply and were a little kooky. There was no diagnosis for that. You didn’t get a dog to go with that everywhere you went. If you had good parents, they accepted that in you. If you had bad parents, they tried to get you to be something else.  Most had bad parents. Now they want to medicate you if you get a little blue when it rains. They medicate little children because they don’t act like well-adjusted adults. They put children on trial as adults. Well, they are not adults. They are children. And if you treat them like adults when they are children, then part of them will still remain a child as an adult. It’s kind of a crazy paradoxical thing.

Now, if you have trouble holding a job or can’t pass algebra two, they give you a psychological diagnosis. Who the fuck can pass algebra 2? No one I know? Certainly not me then or now. Cell phones and the social media don’t help. None of our kids these days are grounded in the earth. So, they are wracked with anxiety.

There is no in between anymore. Only black and white. You are either in or out- on the bus or off the bus. But an emotional support animal? Seems to me these are the folks the dinosaurs would have eaten. At some point in the in the 50’s we toughened the hell up and the dinosaurs went extinct. Right? Either that or they drank themselves to death because they didn’t have emotional support animals.

Survival is still a part of the picture. In places where survival is eminent people have to get their shit together. That’s why I like going to Wyoming in the summers to visit my people there. Up there, survival lives a little closer to the bone. There’s not much work, its 20 below in the winter and the wind is howling at 50 miles an hour. You have to figure it out quickly up there or you’ll starve or freeze to death. There’s no fat on the land to hustle for. I always notice people are a little more emotionally stable in these environments. They are more direct and resourceful. They are little more awake. They have to know about a lot of things in order to survive-like being handy with a hammer, a saw, an ax or money. There’s less class hierarchy up there. A plumber is just as valuable as a doctor. Sometimes more so. There’s not as much time to dilly dally around emotionally. Even the artists I know up there are tough, direct working people. Emotions really don’t serve survival very well.

I broached this emotional support subject with my best friend. He’s a Montana cat. He grew up in the desolate shit show of a dysfunctional family in the wilds of nowhere. He once got in a drunken fistfight with Evel Knievel in his underwear. I’ll say no more. That’s the kind of guy he was. Now he a sensitive loving man.

My friend was a bit flabbergasted about the emotional support critter as well. I said, “if we would have had emotional support animals back in the day, in light of all the abuse, shame and drunkenness of our youth, what would this creature look like? What would it encompass?”
We went straight in.

We decided our emotional support animal would have been an angry, ex circus chimp named Bocephus. He would probably sport a backwards baseball hat and chain smoke Pal Malls. He would probably be prone to grabbing people inappropriately and throwing his feces at you through the bars of his shattered soul- just for a good laugh. He would probably do backwards flips for more cigarettes, beer or bananas and flip you off at any sign of emotional vulnerability. He would touch himself inappropriately in public and bullfighting would be his favorite sport. I found his long-lost brother in Mexico this week (in the picture above). His Mexican counterpart would be named Bocephitos.

Of course, all this emotional bankruptcy comes from having to walk around with a starving heart. Sometimes there is nowhere to turn to feed a starving heart in this world. Especially in America. We are living in dark times. But what I’ve found is the heart flowers in the soul beyond emotion. You just have to sit in said emotion, without resistance and support, till the grief of it all exhausts itself as a solution. It’s the only way to transcend it. It’s the only way to see emotion for what it is. “Ya got to sit in the ugly spot and not resist it”, as my beautiful Montana buddy always says.

There, Bocephus and his ugly Mexican brother Bocephitas die a strung-out lonely death. Out of their decaying corpses sprouts the flower of love incarnate…Love supreme…Suprema amor.

I love u all